I lost both my Mum and my Dad within 5 months…..

My Dad died after a prognosis of lung cancer, the prognosis coming just after I began a year-long Ashtanga teacher training and his death two months before I officially qualified. My Mum, who seemed to give up after their 51 years together, passed four months after the end of my training. She also had cancer, but doctors, despite repeated calls from her to the surgeries, just prescribed her anxiety tablets and never looked for anything else. It was only when she was rushed to hospital, two weeks before she died that they eventually found cancers in her lungs and liver.
During this short but extremely challenging time, I truly learned what yoga is. I thank the time that I’ve spent on a mat over the decades, as all that I had learned came into play. I truly hold that had I not discovered yoga, that I might have lost myself completely.
I don’t feel it would have been enough just to have done asanas per se, but the years perfecting my breath to be in tune with the physical movements and the letting go during Savasana and the subsequent seated mini-meditations following the breath in through the nose and out through the nose were all part of my discovery that nothing matters in life except, for want of a better word, love.
One of the greatest gifts that I think yoga can give is the understanding of impermanence. We see it in the mirror as we age, we see it when the posture you could once spring in to may take a little more thought or focus to achieve and eventually yoga makes one realise that there isn’t actually anything to achieve anyway, except stillness. Stillness of the body, stillness of the senses and stillness of the intellect.
The yoga had helped me be completely present with Mum and Dad as they both went through their pains and fears, and as I went through mine and it allowed me to sit and ‘be’ as they each took their last breath and it allowed me to break down when the mind decided to. Even the saddest moments, the ones when you think you will never stop sobbing, had a devastating beauty within them.
When I was told that the doctors had missed something so very glaringly obvious with my Mum, my first thought was to write letters, make phone calls and lay blame and demand retribution – and once upon a time that was my default setting – but I very quickly realised that it was what it was. My Mum would have spent a torturous time if they had spotted it and told her initially, but in the end she died as peacefully as one could.
After Mum’s funeral it was time for my younger sister and I to go through the belongings and that is where the yoga of non-attachment came to the fore. Neither my Mum or Dad were collectors of anything particular, they had DVD’s and CD’s a plenty and ornaments and the like but no hoards. As you go through the stuff you obviously find all the keepsakes, the love letters, other things you remember from your childhood, like old family games. Every item found paid for with a tear. Nearly all of it had to go. I came across an old wallet of my Dads containing my first business card and a prepubescent photo of me. I paid more than a few tears for this discovery.
This all makes you think the inevitable thought that every person on this planet must have when they lose someone close – what’s the point? My Dad was in and out of hospital, went to chemo and radio therapy and we watched, and to some extent, prepared through his decline; my Mum still had a bit of tea in a cup and a to-do list on the table next to the sofa as the ambulance came for her, never to return. So what is the point? Well, for me the point isn’t collecting stuff, it isn’t working in a job you don’t like or living in a place that you don’t love.
None of us know, despite any ego size, if there is anything after and if there is whether we’d realise there was ever a before. This really could be one shot. But that thought doesn’t make me want to cover myself in foam in Ibiza, or skydive naked or tick off countries visited for the sake of a tick.Thanks to my years of yoga I think the point, for me, is simply to find joy in everything, in every moment possible. I, now more than ever, try to think positive at all times and to be present with whoever I am with. To notice the naturalness of nature and how totally uninterested the fauna and flora is at what we think – but to notice envy and to notice blame and to notice desire, regrets, guilt, worries and label those disabling thoughts or feelings and let them go – and breathe in through the nose and then breathe out through the nose. Find the middle path, even in asanas,avoid self-induced strain and pain whilst practicing effortless effort.

This is what I try to get over (teach) to students.I kept the wallet. 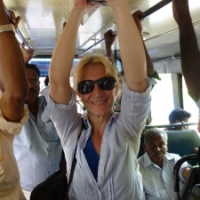